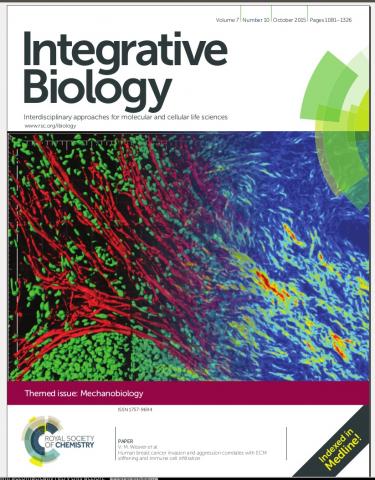 Congratulations to Irene Acerbi and coauthors, whose publication was featured on the cover of Integrative Biology!

Abstract: Tumors are stiff and data suggest that the extracellular matrix stiffening that correlates with experimental mammary malignancy drives tumor invasion and metastasis. Nevertheless, the relationship between tissue and extracellular matrix stiffness and human breast cancer progression and aggression remains unclear. We undertook a biophysical and biochemical assessment of stromal–epithelial interactions in noninvasive, invasive and normal adjacent human breast tissue and in breast cancers of increasingly aggressive subtype. Our analysis revealed that human breast cancer transformation is accompanied by an incremental increase in collagen deposition and a progressive linearization and thickening of interstitial collagen. The linearization of collagen was visualized as an overall increase in tissue birefringence and was most striking at the invasive front of the tumor where the stiffness of the stroma and cellular mechanosignaling were the highest. Amongst breast cancer subtypes we found that the stroma at the invasive region of the more aggressive Basal-like and Her2 tumor subtypes was the most heterogeneous and the stiffest when compared to the less aggressive luminal A and B subtypes. Intriguingly, we quantified the greatest number of infiltrating macrophages and the highest level of TGF beta signaling within the cells at the invasive front. We also established that stroma stiffness and the level of cellular TGF beta signaling positively correlated with each other and with the number of infiltrating tumor-activated macrophages, which was highest in the more aggressive tumor subtypes. These findings indicate that human breast cancer progression and aggression, collagen linearization and stromal stiffening are linked and implicate tissue inflammation and TGF beta.